“Distance not only gives nostalgia, but perspective, and maybe objectivity.” – Robert Morgan

I was recently walking around New York City with a friend who was in town for a visit. As we strolled by Grand Central Station, she commented, “I wonder what it was like living in New York City when all the buildings looked like this.” I’ve had that same thought since moving to NY, and often pondered this idea when walking around my hometown of Boston, MA, where historical buildings are the norm. The classical, elegant style of these early-20th century establishments is a memento of the past as newer, modern buildings dominate the skyline. To me, there’s something nostalgic and oddly simple (ironic, given their lavishness) about these buildings that makes me wish I could have been around to see them in all their glory, when New York’s Grand Central Station truly was the grandest building on the block.

So you can imagine my excitement when, back in September, I saw a promotion for the HBO series Boardwalk Empire that would allow New Yorkers to experience a taste of the past. HBO sponsored an authentic vintage subway train from the 1920s to run on one of New York City’s north-south tracks. The train contained “rattan seats, ceiling fans and drop sash windows, as well as a custom branded interior featuring Boardwalk Empire-inspired period artwork[1],” all for the sake of  transporting passengers back to days of Prohibition. The train itself embodied the spirit of Boardwalk Empire, extending the show’s reach from passive viewers to a real life New Yorkers. 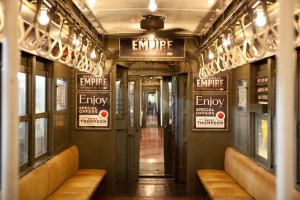 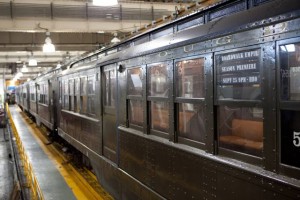 I never had the opportunity to ride this train (it was only in service for a quick 3-week stint in September), but I applaud the HBO marketing department for thinking big with this promotion.  HBO brought the excitement of walking onto a show’s set to the everyday commuter in a way that was original yet classic, fun yet unobtrusive.  The determination to elevate something ordinary, like a commuter’s daily train ride, to something extraordinary, is when marketers truly strike gold.